One of the most talented and remarkable European directors, Igor Voloshin, will direct The Cellar, fiction feature co-produced by Slovakia, Czech Republic and Russia. The film is set in a small Slovak village, with principal photography starting in May 2017. The Cellar was supported by the Slovak Audiovisual Fund, Czech State Cinema Fund and Russian Ministry of Culture.

Voloshin said about The Cellar:

"When I read the script of The Cellar, I contemplated the sober and deep messages that the author has put in.
I then traveled to Bratislava I had ample time to immerse in the country, to capture the unique mentality, atmosphere and the manner in which Slovakia differs from the neighboring Austria and the Czech Republic that seem like softly clamping the country...
I visited different clubs, observed the youth ... and their parents. I was thus immersed in the script, into the life of a country where I wish to film the story as soon as possible, to transfer it from paper to screen, I thought about what man has to go through in order to become Man. This is a most powerful story. I would like to bring the script to film at a high emotional as well as technical level.
A story of an ordinary family, its relationships are in ruins from the very outset. Yet they gradually come to life, blossom like buds and flowers on trees after a long winter...
... The relationships recover, though the process takes place on ruins after the death of the daughter of the two main characters --- a married couple. For the death brings together the parents torn by sorrow.
The paradox of the situation somewhat transforms an “ordinary story” into a classical piece narrated through the language of film.
Certainly, at each point a viewer ought to enjoy the meaningful content of shots, precise cast, and the genuine creative solution of each scene. The viewers should also be able to sense – consciously or subconsciously – the plot as it evolves in front of their eyes.
Fine small budget films of the kind are often similar like two peas. I would like to avoid the stereotype and the cliché in the genre, and to do so subtly." 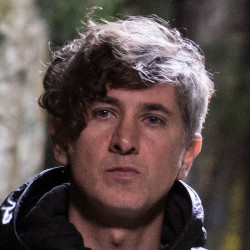