"I do believe that Marta, the director, knows what she is doing and I pray that it ends well and that I don’t spoil the film", says Aneta Langerová, one of the best Czech singers on her film debut.

What was it that got you interested in the character of Anna Barková when you read the script for the first time?
I was intrigued by her rich internal life thanks to which she survived all the dreary things of that time.
What made you to accept this challenge from a different field ?
Marta Nováková, the director, did. First she asked me to sing the labour camp song for the film… in Russian. I realised even then that if I accepted it would not be an easy task, since I can’t speak a word in Russian but I really wanted to give it a try at least because I liked the script, the song and Anna Barkova’s story. As soon as I consented to sing the song, Marta came up with her “great” idea to give me the role in the film. I laughed at it first and I refused. I am not an actress, I can’t act, what would I do in a film? I listened to all the reasons why she wanted me to take the main role and I tried to understand them. Marta kept repeating that she wanted a non-actor, someone natural who would not be acting anything. A year passed, I voiced many doubts on my part in the film but it got under my skin and I was sort of attracted by it. I asked Marta several times whether she really thought that I, unskilled in acting, could fulfil her idea. She always responded in the positive. During that time I came to trust Marta very much and eventually I consented to take the role.
How did you prepare for this demanding task?
When I sing I identify with different stories to be able to convey the principal emotion of the song. I try to identify with the character of Anna Barkova in very much the same way. With Marta I rehearse various parts of the script, we  shoot it on video and then discuss it in detail. I admire the work of real actors, it is a demanding job, especially when you have a non-actor beside you. But I do believe that Marta knows what she is doing and I pray that it ends well and that I don’t spoil the film.

Read the newest article published in one of the main Czech dailies on the shooting of our feature 8Heads of Madness and its star, Aneta Langerová http://kultura.idnes.cz/langerova-toci-film-041-/filmvideo.aspx?c=A130218_100251_filmvideo_spm 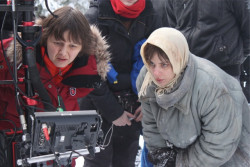