Our feature-length documentary with animations, The Terezin Gravediggers, supported by the Czech State Cinema Fund for script development, enters a new phase. Two authors of the film, Olga Strusková and Pavel Koutský, were location scouting and looking for archive materials in Budapest, Hungary. The script development is currently completed.

The new version of the script includes scenes where the narrator of the film, writer František R.Kraus, whose short story was an inspiration to our film, spends time in Budapest in the spring of 1945 and writes for the first time about his experience with Holocaust. Olga and Pavel were in Hungary right at the beginning of the year, from the 7th to the 9th of January and apart from location scouting, met with our Hungarian script consultant, György Báron, with András Kovács, professor for European and Jewish studies, with the historian Lászlo Kársai, and in the Hungarian National Archive they had a meeting with dr. Lászlo Csösz.

Our filmmakers went – among other places - to the Holocaust Memorial with a Synagogue and exposition dedicated to the history of Hungarian Jews during the pre-war and war periods. Another important stop were so called “Shoes on the Danube Bank“, a memorial conceived by film director Can Togay in 2005. Togay created it on the west bank of the Danube River with sculptor Gyula Pauer to honor the Jews who were killed by fascist Arrow Cross militiamen in Budapest during World War II, in December 1944 and January 1945. The Jews were ordered to take off their shoes, and were shot at the edge of the water so that their bodies fell into the river and were carried away.

The memorial consists of sixty pairs of old-fashioned shoes, the type people wore in the 1940s. There are women's shoes, there are men's shoes and there are children's shoes. They sit at the edge of the water, scattered and abandoned, as though their owners had just stepped out of them and left them there. The shoes are rusted, made of iron and set into the concrete of the embankment. This symbolic location will be used during the shooting of our film. 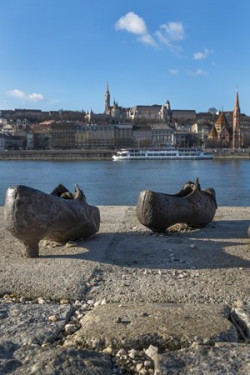