The Big Christopher, i.e. Lielais Kristaps, the highest award in Latvian cinema, went to the Czech Actress Brigita Cmuntová for Best Supporting Role in the film The Sign Painter, while Best Sound Award was presented to Czechs Ludvík K. Bohadlo and Robert Slezák for the same movie.

Our film The Sign Painter (aka City on the River), directed by Viestur Kairish, received four awards including Best Script (Viestur Kairish), Best Leading Role (Davis Suharevkis) and two above-mentioned awards for Czech filmmakers. The award ceremony took place on Sunday, November 15th, with nominees waiting for the results in front of their TVs and computers. The award-winners were then connected with the live ceremony via Skype.

It was for the first time that – similar to e.g. the Berlinale - the difference between awards for female and male actors was erased and there was only one award – for the best leading role and for the best supporting role. “I feel very honoured that my playing the part of Zisla got such high appreciation in Latvia. Being a part of this film was a big experience for me, not always an easy one, especially due to having to learn my lines in Latgalian and also due to the Jewish topic that was tied with my character. Thank you very much for this award. My big thanks go also to the entire team that is behind this film“, said Brigita Cmuntová after receiving The Big Christopher.
Ludvík K. Bohadlo from Prague SLEEPWALKER sound studio summed his experience with The Signed Painter and receiving Lielais Kristaps: “We stared the filming in heavy winter with a scene where a group of grandmothers sing a burial song at an old countryside cemetery. I quickly realized that working on a soundtrack for this movie will be something of a dream come true. At first we had a chance to record super clean location sound as there were almost no industrial noises in Latgale. Great music and extraordinary visual style of storytelling by camera of Gints Berzins made a vital space for sound creativity which I believe we used to maximum possibility together with re-recording mixer Robert Slezák and the whole SLEEPWALKER studio sound team.”
The Sign Painter is a co-production between Ego Media (LV), 8Heads Productions (CZ) and Artbox (LT), distributed internationally by Austrian sales agent EastWest Filmdistribution. The film opened domestically on January 11th, 2020. Until the country’s mid-March lockdown it collected 66, 000 admissions making it this year’s box office number one in Latvia. Due to the pandemic, the film is still waiting for its release in other countries, including Czech Republic.
The Sign Painter is currently being presented in the Official Selection Competition of the Tallinn Black Nights Film Festival (PÖFF) which started two days ago, on November 13th, and will run till November 29th. The festival is held as a hybrid event, combining real cinemas screenings with virtual festival for film professionals. On November 19th, The Sign Painter will have its North American premiere at the Gershman Philadelphia Jewish Film Festival. The film's North American distributor is Menemsha Films. 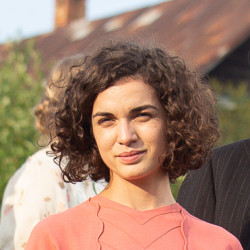