As the only girl in a boys’ junior ice hockey team, Alex has yet to assert her female identity.

Like my main character Alex, I come from a sports family and I used to play winter sports professionally as a teenager. In the sporty environment, I often was the only girl among boys, and I constantly felt myself being different, although I really wanted to fit into the group. This feeling inspired Ice Break – the story about a girl in the “men's world” of ice hockey.

Teenage Alex is the only girl in a boys’ ice-hockey team. Her dad Michal, who raised her alone, is the team’s coach. He treats Alex like one of the players, both on the ice and at home. Alex herself resembles a guy - with her short haircut, with body, affected by years of tough training and with her boyish behaviour. She is a tough player, rather than a young woman or a daughter, and her surroundings treat her according to that. But it starts bothering her now, as she is in love with one of her teammates…Ice Break is a story of frustration, rebellion and absence of communication in the family that takes courage to overcome.

“Ice hockey is a tough masculine sport, high-contact and traumatic, and in adult teams, women never play with men. However, in Czechia, despite the immense popularity of hockey, there still aren’t enough female junior teams, so girls often play with boys. When I spoke with female hockey players, who had such experiences, I was fascinated by the inner conflict they faced. Guys on the team often treat the only girl as one of them and don’t perceive her as a “proper” female. Besides, hockey noticeably affects girls’ bodies. A girl in this sport goes through frustration with herself at least once, as it is even impossible for her to find fitting clothes. For me, such conflict of being a tough hockey player and a female teenager at the same time is the key inspiration for the Ice Break, and this is the main conflict of Alex", says author Elvira Dulskaia. 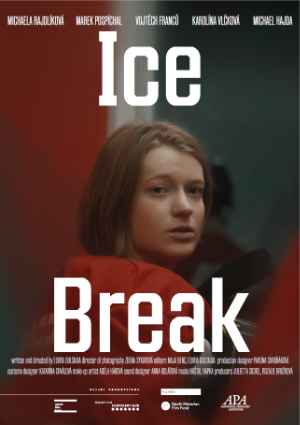