Three veterans of an elite task force deployed on foreign missions face a very different battle when they return to their civilian lives. These have no clearly defined battlefield or enemy, yet they represent a series of daunting challenges. Despite the clear risks, wartime operations also provided a safe zone of male camaraderie and teamwork.

Suddenly, the three protagonists are fighting on their own in a world where bullets don't whizz and mines don't explode, yet full of inscrutable pitfalls for which military drill has not prepared them. The film charts their groping and complex search for new roles over a period of several years. It explores questions of the motivations that brought them into the army and the impact on their family life.

While many countries in the Euro-Atlantic alliance are trying to ease the transition to civilian life for their veterans, the Czech Republic has long tended to overlook the issue. This is reflected in a social narrative oscillating between respect, indifference and disdain.

The concept of heroism is in a space that is far from war relativised.

A remarkable portrait of three professional soldiers whose extraordinary skills and experience are rendered virtually useless from one day to the next.

Special thanks to Prabos, Koutný Prostějov and Redo for their support 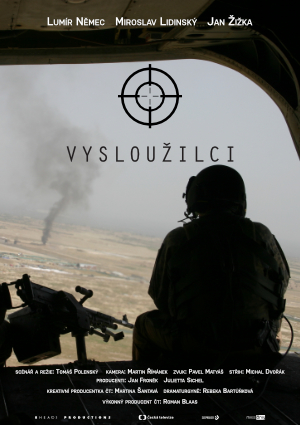