Breathe in. The present. Breathe out. Ostrava, an old flat in Poruba. The noisy breathing grows less frequent.  An old woman, Adela’s mother, fails to reach the inhalator and suffocates. A murder or self-defence? The door closes. Adela (30) goes on living, imprisoned and sentenced to life by herself.

The very best intentions lead Adela to hell. She is full of resolve to  take care about her ill mother Zdena (65) who has no one else in life than her. Willing or not, Adela is burdened by her mother’s experience with the death of her closest ones: in a car crash, whose drive at fault remained unpunished, Zdena lost her husband and a four-year-old son. Adela survived, hidden in her mother’s womb. The consequences of the crash caused Zdena’s long health problems, only augmented by living in the city – Ostrava is still a place where exceptional smog concentrations are daily reality.

Breath in. Adela finds courage to start a new life with her husband Filip (25). She married against her mother’s protests. With her husband, she decided to buy and refurbish a house just outside Ostrava where all would be happy. So far they have to live all three together in a small flat but the vision of happy stay in a roomy house fills them with joy. That is until it transpires that due to undisclosed conditions of the statics they do not have enough money to reconstruct the building and that what was seen as a temporary settlement in a small flat is a definitive solution for them at the moment. Living jointly with a husband and a protective mother is difficult to reconcile – Adela has to make a choice! Never ending getting over mother’s repulsion towards Filip, loss of the loved job and unwanted pregnancy – this heavy cocktail crushes Adela and cuts her life to sole being, strips the fullness of life to sheer survival instinct.

Breathe out. The pressure gets stronger. Oddly enough, Adela finds strength for the hard decisin to resist her mother at the time when she suspects Filip of succumbing to charms of a model with whom he shoots nudes for his theses. What actually happens is that he breaks up with the model.

Breathe in. The big love to Filip, which made Adela to mature, left her with her child. Her child and debts. The relationship to Filip is definitely gone. Mosaics of past actions, half-forgotten truths, chaining and possible mistaking cause for effects – this is what Adela feels on her course to childbirth. She is alone, she sorts things left by her mother, packs belongings of her departing husband and searches for herself.

Breathe out. Filip wants to take revenge on Adela for divorcing him and accuses her of murdering her mother.  The investigation is closed due to lack of evidence. Adela is cleaned before the law but her conscience will remain stained for ever. A complicated childbirth, the child nearly suffocates, she is not allowed to see her. This becomes Adela’s punishment. The child is eventually saved but Adela remains imprisoned in her dead mother’s flat with her guilt and her daughter Viktoria. 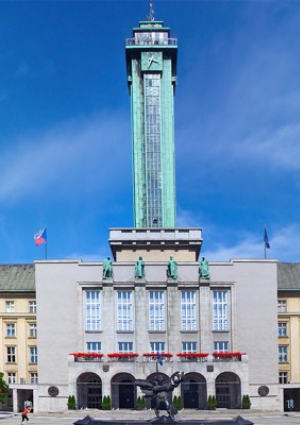